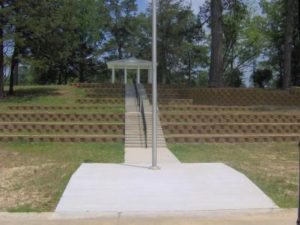 Florien was established in the late nineteenth century. The town plat was surveyed and certified 1 May 1897 by Don Vandeguer. The name came from Florien Giauque. The post office opened in 1908 with Willie Hall as postmaster. The first post office was in a store on the west side of the Kansas City Southern railroad tracks. Later a small building on a hill west of Highway 171 on Port Arthur Avenue was built to replace the post office in the store. It was on the left side of the street, before you reach the railroad tracks. It was lighted with carbide gas lights. The steps up the hill to this post office still remain, but the post office is now on Highway 171.

Florien contained two cotton gins, one hotel with a “cussing” parrot, one ice house, three garages (or filling stations), one bank, seven stores, a school, a Masonic Hall, barber shop, two churches in town, and “Old Doctor Torr’s” office in the days before 1940. The Arringtons owned one of the gins and the Knippers owned the other. As the old farmers died off and the young left town, the gins were closed for lack of cotton to gin.

The construction of the Kansas City Southern Railroad through the town occurred in 1896. The Kansas City Southern built the train depot in 1922. This was a poor farming community and the coming of the train provided many jobs. “Tie hacking” became the method of earning extra money during the periods when the farmers were at rest. The ties were hand made with a broad axe. Many thousands of railroad ties were shipped from Florien. Large numbers of pilings were also shipped. Filings were logs with the bark stripped off. Few saw logs, if any, were shipped from here. They were trucked to the mill at Fisher, Louisiana, about four miles, or to the mill at Candy, an equal distance.

A tomato packing shed was built across the tracks from the depot in the 1930s. This was a failure as the buyers at the shed ripped the farmers off after they had labored to grow the tomatoes.

The bank closed after it was robbed. Numerous people lost all their money in that bank. The old timers, to this day, still say, “It was an inside job.” The Westbrook store was opened in the building.

The Baptist Church was on the southwest part of the school grounds. The Colored Church was on the north side of the town. Ebenezer Church is about a mile northwest of town on the old Fisher Road. Prospect Church is about two miles southwest of town. The old Antioch Church site is at or near this church. The Union Church is a little over two miles southeast of town. The Baptist Brush Arbor Church site was about a mile east of Florien. The brush arbor was replaced by a wood building. This church was called “Sit and Grin.” No sign of this church remains. These churches, and other churches in Sabine Parish, had “big dinners on the ground” in the 1930s. The Sundays with dinner on the ground drew large crowds. It was difficult to determine how many came for religion or food.

The Dover House was constructed around 1920. There are other houses in or near the town that may be older.

The old brick school, built sometime around 1930 was the finest in the Parish (now destroyed). The WPA filled in and leveled the grounds around the school with wheelbarrows. A bluff remained where the fill dirt was obtained. A fence was built, using the bluff as part of the enclosure, for a rodeo arena in the 1930s. The bluff was used as the grandstand. People came from miles to test their skills on the cattle furnished by the Salters.

The tent “motion picture show” came to Florien and other towns in the Parish from time to time. It would set up on the vacant lot west of the old bank building (Westbrook’s Store) and east of the old Holt’s building in the 1930s. The price for the show was five cents. The bank building is now gone.

Ivey Mothershed drove a covered wagon transporting the school children out to the nearest school bus in the 1930s. He lived near the old Ash Pond bridge on Toro Bayou. The old Ash Pond Road was the route from Florien to Mount Carmel in the early 1900s.

A law was enacted in the twenties or early thirties requiring all cattle to be dipped each week. A dab of paint was placed on each animal showing they were dipped during each period. The cows in the area looked like polka-dot cows as a result of all the colored dots painted on them at the dipping vat as the color was changed at each period. All livestock were required to be dipped.

The town was filled with wagons on Saturday when the folks from the out-reaching areas came in for supplies and to gossip in the 1920s and 30s.

The era of the passenger train soon ended. The mail was snatched from a grab pole in later years as the train no longer stopped in Florien when there were no passengers from the town. Even the freight trains grabbed messages from a loop cane held by the depot manager. Many years later the depot building was purchased from the Kansas City Southern Railroad and moved to the main street of the town for other uses.

This was the town! up to the 1940s. The glory days of Florien are gone. They now have a jail house and a mayor (John Manasco at this time). The Sabine Free State Festival is held in November each year. There is now a plywood mill nearby and not much else.

Who Dug the Gold Mine
Natives of Florien believe their section of the state has the only gold mine ever heard of in Louisiana.

Nobody knows how old the abandoned site is or who dug the many bee-hive of tunnels which traverse the approximate seven acres of high ground, deep in the woods west of Florien.

According to Kile Salter, a resident of rural Florien, that section of Sabine Parish was Settled about 1882 and those early settlers said the “mine” was old when they first came.

He said there are three legends surrounding the hill, which towers approximately one hundred feet and is covered with underbrush and trees: Ancient Indians could have.dug those tunnels, the Spaniards could have dug them when they held that section of the state or it could have served as a hideout for the desperate Murrell outlaw gang which operated in the Free State of Sabine before it became a part of Louisiana.

At any rate, the walls of the tunnels sparkle here and there with a golden dust: and the sandy soil topping the hill gleams with the same substance when closely inspected.

Salter said in the early thirties, carloads of the gold-flecked dirt was shipped out of state by a company working the site and that some people baked and chipped some of the soil with the hope of getting enough “dust” to do some good.

Salter said legend also has it that a room filled with a fortune in gold is supposedly sealed off from one of the tunnels. Through the years various prospectors have dug down into the hill crest as deep as seventy five feet in.the hope of penetrating the treasure room. Nobody has yet succeeded.

Area folks believe the flecks to be gold dust but as to the who, when or why of the tunnels, which are over a hundred years old, the mystery remains a mystery.

Source: Sabine Parish Library; authors: Florien, Louisiana Before 1940 by Samuel J. Touchstone and Who Dug the Gold Mine by Dorothy Seals and Toledo-Bend.com